When Ammar Swalim took over a small Pacific Heights hardware store two weeks ago, he knew he’d be inheriting tightly packed aisles filled with hammers and bleach and lightbulbs. He didn’t know what was growing in the backyard at California Street: a huge avocado tree, dripping with plump fruit that makes each one sound like a loud thud when it hits the ground.

The avocado tree — lush, verdant and with too many branches to count — towers over the backyard with a magical presence. This avocado tree, which is estimated to be nearly 50 feet tall, bears softball-sized, lime-green avocados in foggy San Francisco. Avocado trees thrive in warm, humid climates. It can take up to 15 years for a seed to bear fruit.

Swalim decided to open Nextdoor.com’s floodgates on Sunday, offering free avocados from the tree. In less than 24 hours, Swalim’s post on Nextdoor.com attracted more than 250 comments. His inbox was flooded with pleas coming from all over the Bay Area. Many people, including this reporter, rushed to the tree on Monday to grab some avocados. The tree shares the yard with a rosemary bush and a lemon tree.

Ammar Swalim next to the trunk of the huge backyard avocado tree from which he’s giving away fruit to neighbors.

Swalim, a Pacific Heights True Value Hardware Store employee, makes his way up the stairs to the backyard to retrieve avocados that have fallen. He’s eaten more than few himself, and says they’re delicious.

But he found he had so many, he thought he’d offer them for free to people in the neighborhood — and perhaps drum up some business for his new store. But he accidentally alerted San Francisco when he posted his Nextdoor post.

“I think we have the biggest avocado tree in the USA located in the heart of Pacific Heights,”Swalim proudly posted the blurry photos below of the tree in his post. “All neighbors eat (them) and they are tired of eating so much avocados.”

Some offered to trade herbs and fruits from their backyards. A representative from San Francisco Public Works suggested Swalim register the tree with the city’s Urban Harvesting Program so the avocados can be distributed to shelters and food banks. Some sent Swalim messages about avocado trees in their own lives, like one woman’s mother’s tree in Hawaii, or another San Francisco tree that’s also enormous but never bears fruit.

The most eager, though, just showed up as soon as possible to secure their prizes, which Swalim keeps in a crate below the store’s cash register.

“They’re excited. They’re happy to have free avocados,”Swalim spoke of the people who came to the store on Monday. Swalim gave out at least two to three avocados each person. As a thank-you, several people bought something at the hardware store. 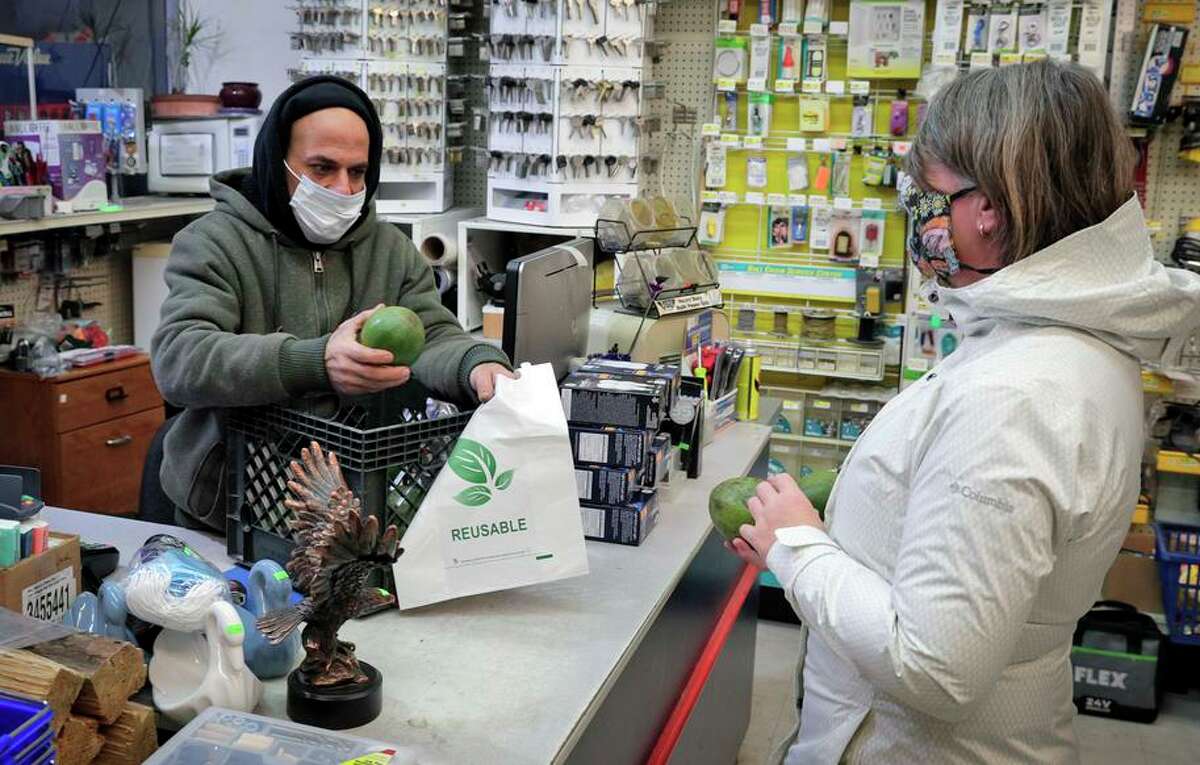 Elsa Bronte was one of the NextDoor users who saw Ammar Swalim’s post and came by to snag some of the fat, home-grown avocados.

Elsa Bronte, one of the lucky recipients of avocados, was among them. She wanted to use the creamy flesh of the avocados in leftover pork tenderloin sandwiches. Nextdoor is a site more known for its long threads about crime or neighborhood complaints. The avocado post was a welcome surprise.

“It is refreshing to see a positive and generous post on Nextdoor,” Bronte said. “I think that’s also what drew me in.”

Swalim, who inherited the store after having worked as a barista in San Francisco for more than a ten years., doesn’t know how old the tree is. He said the previous owner, who ran the California Street store for 15 years, didn’t know either.

Gary Gragg, who cultivates avocado trees at Richmond nursery Golden Gate PalmsAccording to Gragg, the tree could be between 40 and 100 years old. While avocado trees don’t like the oceanic winds that blow through San Francisco, Gragg said, they can grow if shielded by other trees or a building, as Swalim’s is. He said that all avocado trees bloom from March through May. Depending on the variety of avocado, the fruit can be ready for consumption in six to fourteen months.

Though it’s a misconception that avocado trees can’t thrive in Bay Area climates, Gragg said, this tree is unusually tall. It’s also unique for another reason: A tree this large and this old means it likely grew from a seedling decades ago, Gragg said, when there were many more varieties of avocado. Although Haas accounts for the majority of current production, there are more than a thousand varieties of avocado. “lost to time,”He said.

“A lot of these really old trees came from a much larger genetic bank of possibilities than what people are throwing out in their backyards today from seed,”Gragg spends his spare time driving around the Bay Area looking for unusual avocado varieties he might have missed.

It’s not clear what kind of avocado Swalim’s tree produces. The fruit has the smooth skin and large size of a Mexican avocado. However, it is rounder and more similar to a Guatemalan avocado. He suggested that it could be a combination of both. He suspects it’s a seedling hybrid, which means a seed germinated and created a unique fruit.

“It makes me wonder — and you’ll never know, it’s always a mystery — as to what the exact lineage of the fruit is,”Gragg said. 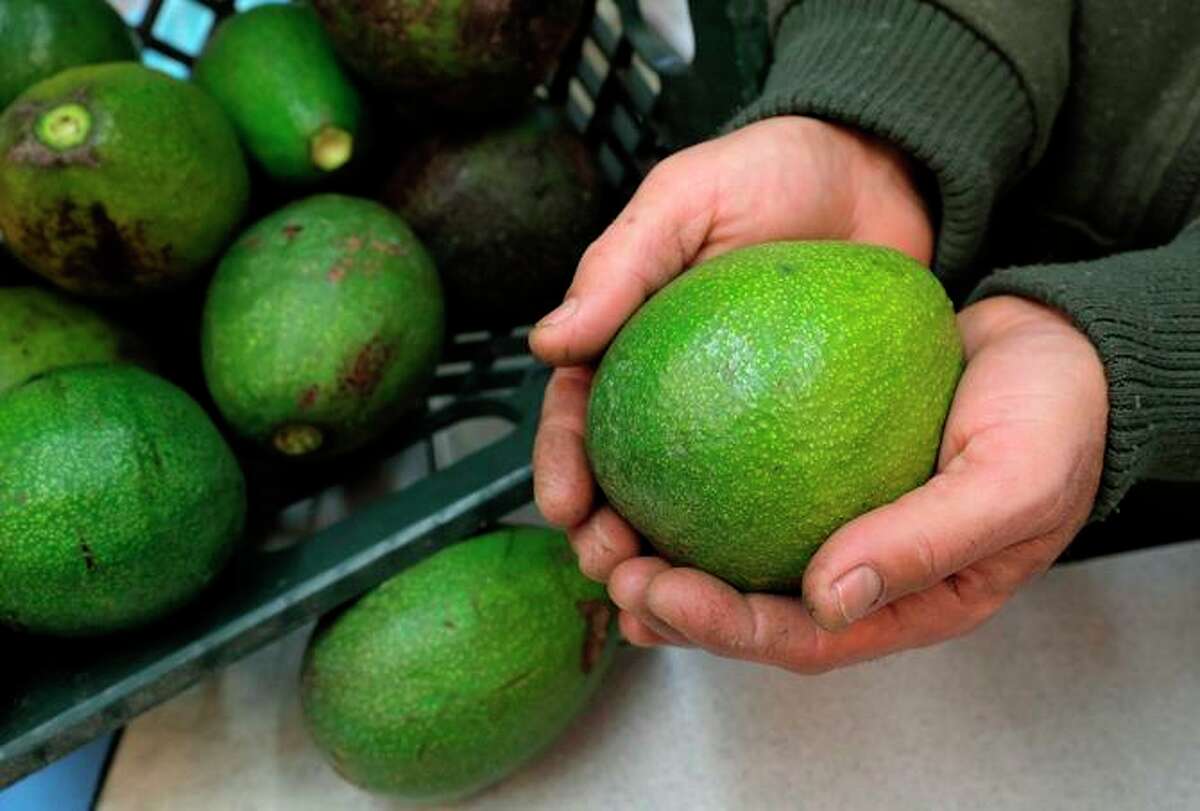 Ammar Swalim holds an avocado that grew on a huge tree, almost 50 feet tall, in his backyard.

Ditka Reiner, a resident near Lafayette Park was shocked to hear that an avocado tree four stories high was producing fruit in her neighborhood. She visited the avocado tree Monday afternoon and was astonished to see it in person. “Unbelievable! Here?”Swalim was consulted. “I have to see it. Can I see it?”

She intended to use her avocados for future salads, guacamole, and omelettes. She said that avocado toast was not on the table. Too trendy. Reiner is an avid gardener and cook who makes strawberry syrup and vanilla extract from her own strawberries. (Incidentally her cousin is Helen Rosner from New York.

But even more than the avocado’s tempting flesh, she was affected by Swalim’s generosity.

“I just thought it was really, really generous and neighborly,” she said — an example of a social media platform at its best. She told Swalim when her own lemon tree is in season, she’ll be back to return the favor.

Not everyone was as enthused about Swalim’s post. The store’s upstairs neighbors got upset, he said, by Tuesday morning had locked the backyard door from the outside, closing his access to the tree.

Gragg said that while the Pacific Heights tree is unique, everyone who lives in the Bay Area should attempt to plant a tree.

“I’ve had a huge crusade over the last 25 years: There should be an avocado tree in everyone’s backyard. It’s one of the only fruits that gives you highly nutritious caloric value. Most fruits are sugary. But the avocado,”He said, “gives you everything.”