The treehouse is 130 stories high and has a level that makes your legs super long. There’s also a soft grassy hill that you can roll down. The GRABINATOR can grab anything at any time.

It’s a wonderful place for people who love strange and wacky things. However, it’s not ideal if Andy and Terry are trying to finish writing and illustrated their latest book.

Thankfully, their IRL counterparts, author Andy Griffiths and illustrator Terry Denton, did finish their book — and released it to the world in 2020 as The 130-Storey Treehouse.

Their latest treehouse has far more storeys than Andy and Terry’s first treehouse (the subject of 2011’s The 13-Storey Treehouse) but despite the original’s comparatively diminutive size, it was still filled with many fantastical distractions — including a marshmallow machine and a tank full of ravenous sharks.

The festival returns this August 28-29

Terry and Andy have 33 bestselling books between them, starting in 1997 with Just Tricking!

Andy is also the creator of The Bum Trilogy, whose first title The Day My Bum Was Psycho was a hilarious laugher back in 2001. His work is a treasure trove of questions.

We asked kids to send Andy their most important questions in advance of RN’s Big Weekend of Books (August 28, 29). These are his answers, edited for clarity and length.

Jasper: Did you have a treehouse as a child?

I hope you have a Treehouse. If you don’t have one, you can visit ours anytime. We’re open seven days a week. We hope to see you there

James and Isaac, do you have a treehouse? [now]?

Andy: Look, I’ve got to confess that I don’t actually have a 130-storey treehouse, but I certainly do in my imagination, it feels very real to me …

The Treehouse was founded 10 years ago. [series]Terry was also there. [my wife]Jill would often be there, and we’d all be making up an imaginary story. It was like being back in the treehouse. [my cousin]David. That’s where the idea originated. 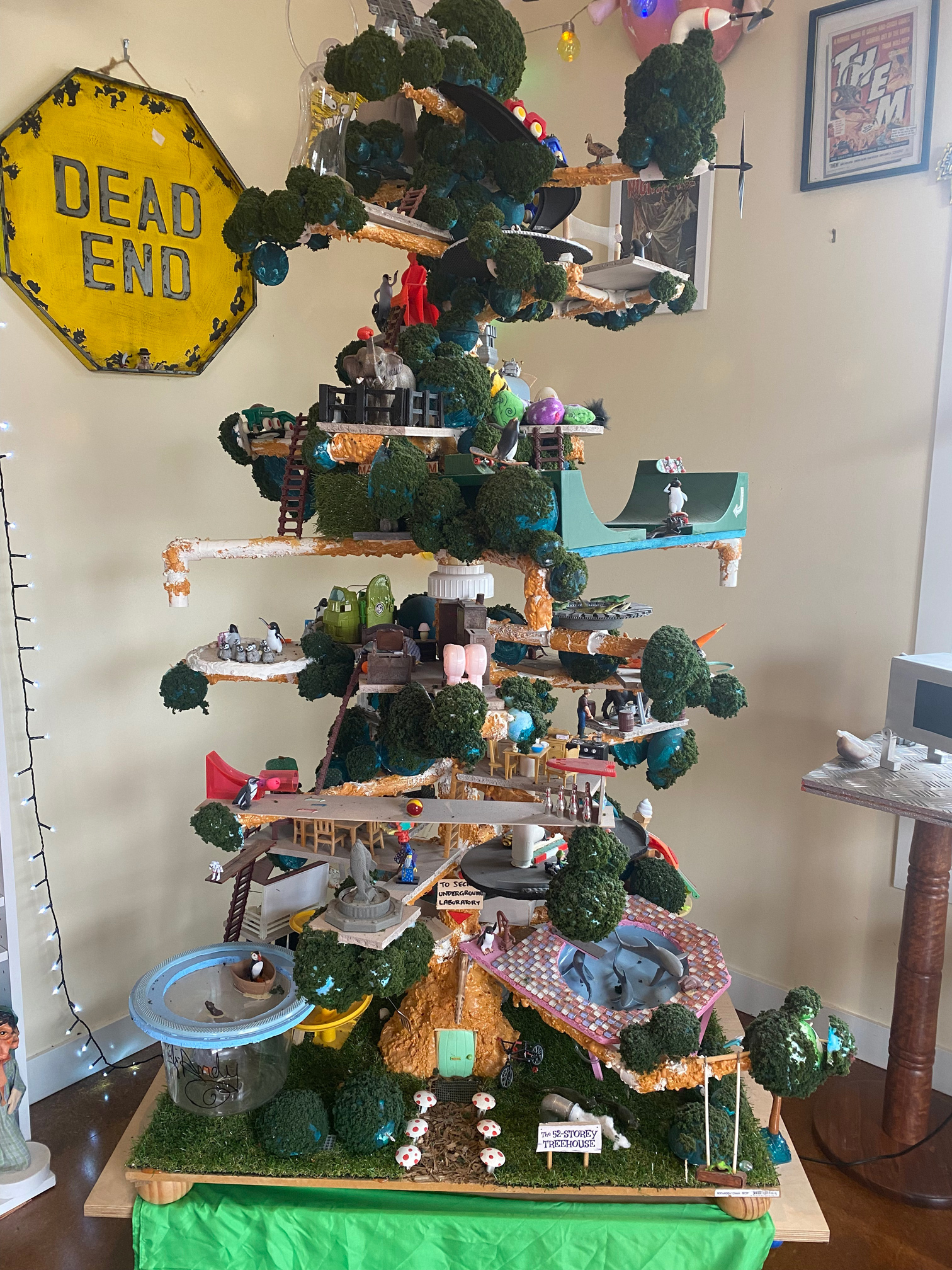 Andy keeps the model of The 52-Storey Treehouse in his studio.(

made by a very clever bookshop manager in Perth … It has many of the features: it’s got sharks, it’s got penguins, it’s got a skateboard ramp with a crocodile-pit hazard down there, a room full of pillows. It’s even got some solar panels on the top … There is a rocking horse race track, dinosaurs, so it’s got a lot of stuff. That is definitely real.[the treehouse]Max: If you had one

Which would be your favorite level?[a treehouse]Andy: Andyland is my favorite level. That’s where I created all the Andy clones from a cloning device. It’s such a lovely, well-ordered, fantastic place to be — not like that terrible Terrytown which is just full of crazy Terrys.

Although Jillville is very nice — that’s where lots of Jills have animal adventures. In fact, Jillville is where I like to be.

Andy: There are many reasons that you might be inspired to write books. One of those things in the Treehouse series was a book I grew up reading as a child, The Magic Faraway Tree.

Three children discover a magic tree and climb it. It’s full with all kinds of bizarre and sometimes scary characters.[by Enid Blyton]And at the top, there’s a different land each time … It might be The Land of Do-As-You-Please or The Land of Spells … Some of it was pleasurable, some of it was scary, but you never knew what was going to happen next.

I love to write books that have a mix of danger, fun, and excitement.(*) The 52-Storey Treehouse won Book of the Year at the 2015 Australian Book Industry Awards (pictured here a Terry Denton illustration from the forthcoming The 143-Storey Treehouse).( 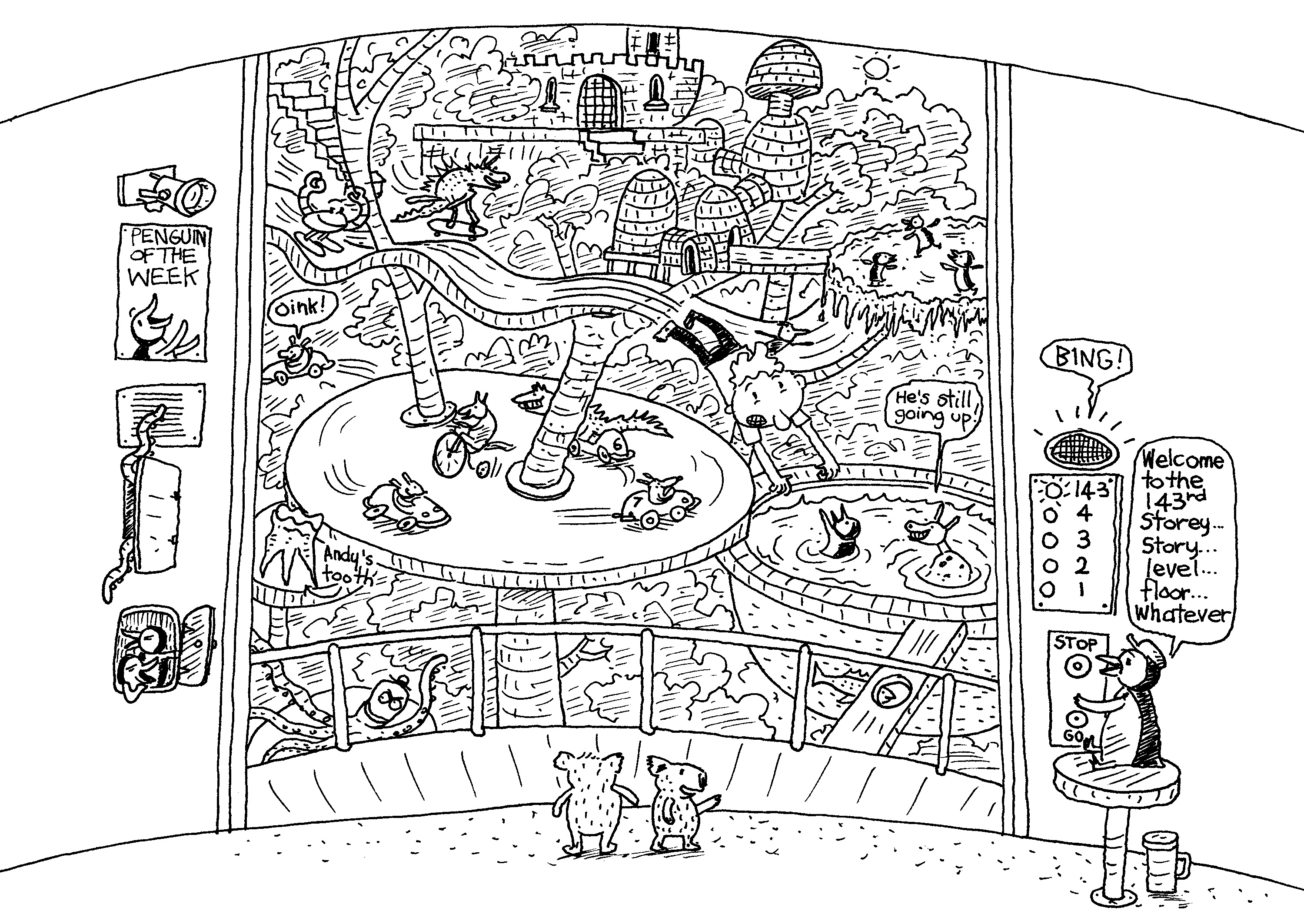 Oliver: Which character is your favourite?

Andy: It’s Professor Stupido. He’s the UN-inventor who invented it all.

who can just point his finger at someone or something — anything he doesn’t like — and just make it disappear and un-invent it on the spot.[in the Treehouse series]I regret that we manipulated him into un-inventing his own invention. But, I just finished Tales from the Treehouse which is a collection of stories about Professor Stupido, the greatest UN inventor in the world, and how he un-invents it. Keep watching.

James: Are you a collector?[in The 39-Storey Treehouse]Andy: I am a collector … Books are a big part of my collecting, and also puppets. I love puppet theatres of all kinds, as well as any puppets or puppet puppets that make me laugh.(*) Andy’s collection of strange objects.( One of the things I collect most is ideas. I have a lot of notebooks where I just write down ideas for names and stories.

Georgia and Lucinda: What are your ideas?

Andy: One of the things I use to help me is my large collection of toys … the toys will trigger ideas,

Movies, books, and real life.[in my collection]Andy’s Melbourne studio is a lot like his magical treehouse in books. It is filled with distractions, but also inspiration.(

When Terry is here, he’s often distracted so there’s a lot of ideas that go from there and we’re making each other laugh, and in that process you will generate a lot of nonsense — but you’ll also occasionally hit on something that’s really good and worth turning into a much larger story.

This is why I love to write. I love to laugh and love to share that with others.[but also]Alfie: Do you plan to publish another book? Who is your publisher? Andy: Andy, We will be publishing a new book on October 19th. It will be called The 143 Storey Treehouse.(*) Andy and Terry’s forthcoming The 143-Storey Treehouse book is the 11th in the series, which has been published in over 35 countries.(

We have a new camping category and are looking forward to a relaxing vacation. We will, as long as Terry remembers that he has to pack the food, the tent, and that he doesn’t cut me in half while he’s cutting wood. It’s going out to be a lot fun. I hope that you can join us.

I am also happy to inform you that our real publisher is not Mr Big Nose.

. Claire is a beautiful woman.

We are very happy that she doesn’t lose her temper or yell at us.

Mr Big Nose is a bigger bad wolf than the one he is. He snorts and huffs, making Andy and Terry extremely scared. 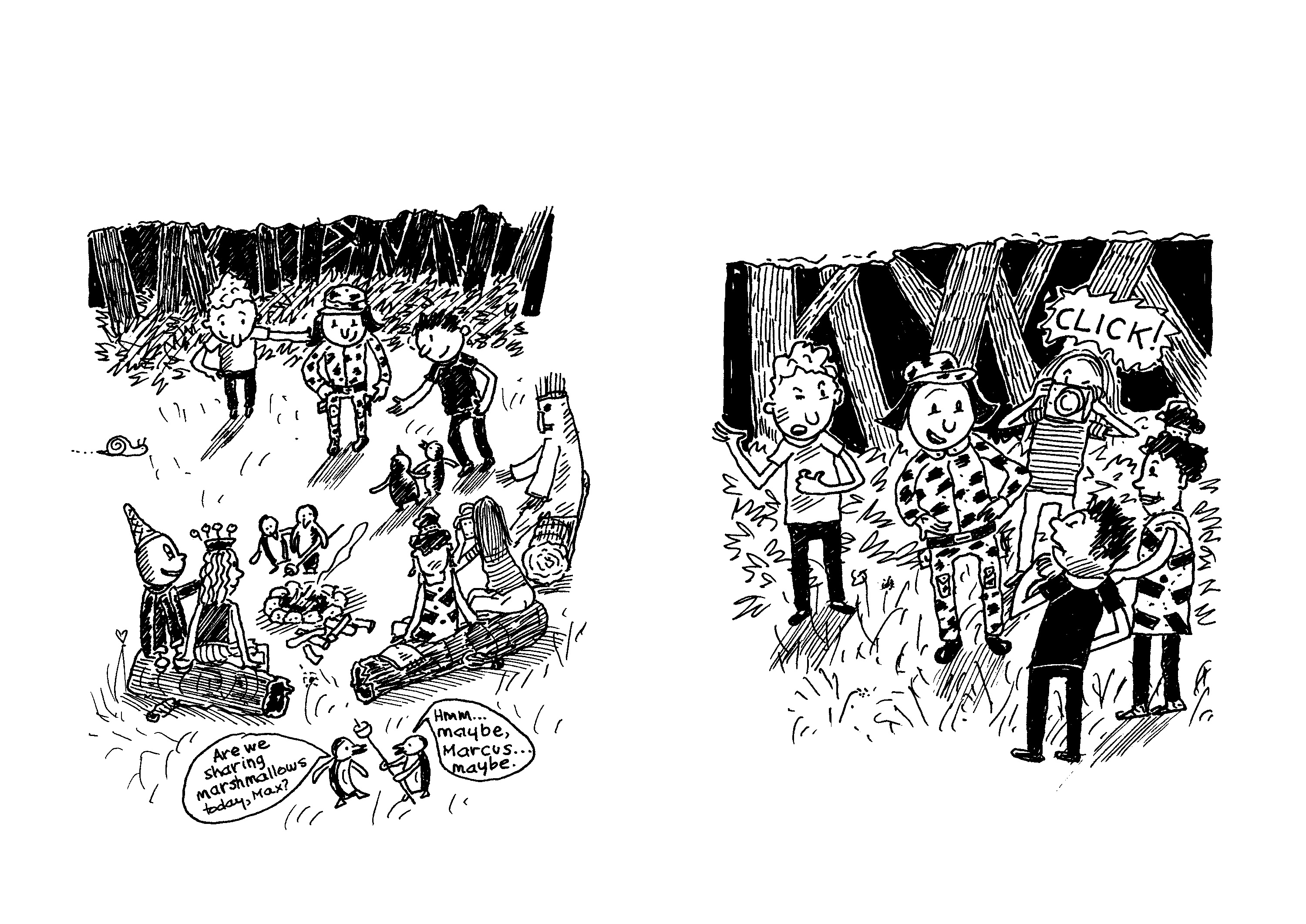