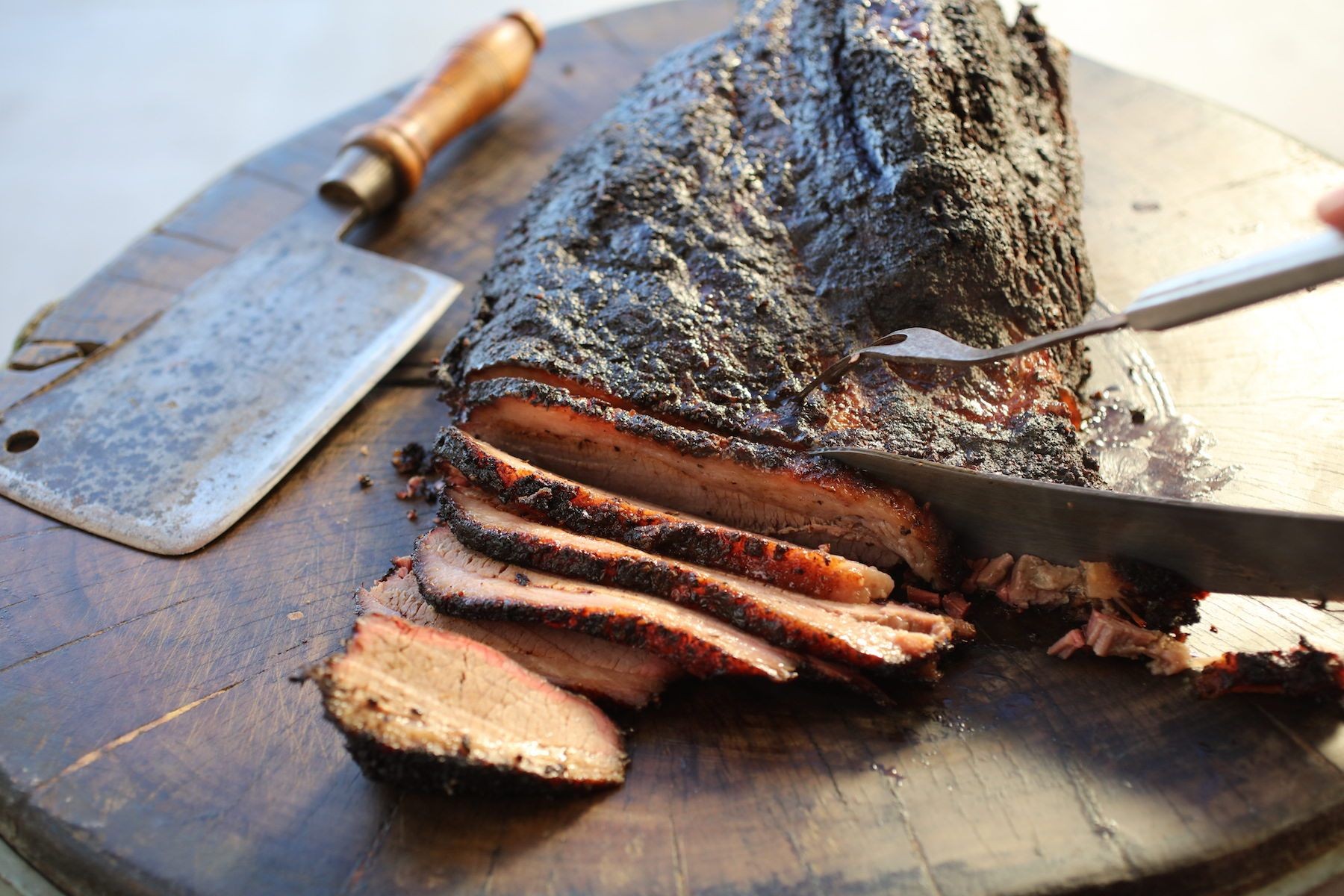 Goode Co. Barbeque, 20102 Northwest Freeway, reopens April 1. For the past two years, the location has been on hiatus due to the pandemic. Now, the restaurant is firing up the smokers once again to serve Houstonians its famous barbecue and from-scratch sides and desserts.

The Goode family has been delivering its quality slow-smoked and grilled meats to barbecue lovers since 1977, using a secret blend of herbs and spices. Chef and owner Levi Goode (could a barbecue guy have a more fitting name?) is excited to open the doors and welcome back friends and neighbors. In a press release Goode said, ” While we had some pop-up events and holiday drive-thru pick-ups during the pandemic, we had to make the difficult decision to temporarily close this location for daily service. We have missed serving the community and are ready to be back in the saddle again!” 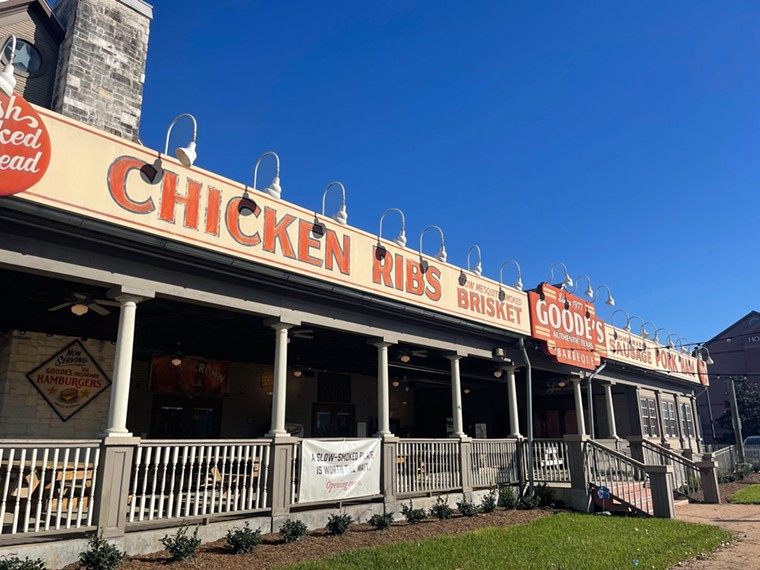 The reopened location will be open for limited hours at first, so loyal fans will have to make plans for ‘que eating from 11 a.m. to 8 p.m. Friday, Saturday and Sunday. Openings hours will be expanded soon.
Escape the hustle and bustle at Lees Den.
Photo by Jenn Duncan” class=”uk-display-block uk-position-relative uk-visible-toggle”> click to enlarge Escape the hustle and bustle at Lees Den.

Lees Den, 2424 Dunstan, opens April 7 in the space that was formerly Benjy’s Upstairs. Owner Benjy Levit has transformed the 1,000 foot square space into an intimate wine bar above his Local Foods Market concept. The bar can be accessed through the market during regular hours or by the side speakeasy entrance.

Guests will enter into a modern, yet vintage-inspired space that is warm and welcoming with wood highlights and chartreuse green velvet built-in seating. It’s meant to be a serene tropical tree house where Houstonians can escape and it also offers a covered patio. Brittany Vaughan of Garnish Designs created a respite in the city.

Leading the restaurant as General Manager and Wine Director will be Chrisanna Shewbart, who is a certified sommelier and has a passion for natural wines. Lees Den will offer wines by the glass with a rotating selection each week. There will also be wines by the bottle which will be available at bottle shop price with no corkage fee.

Executive Chef Maria Gonzales will helm the kitchen and she has created a menu of snacks such as Benjy’s Hurricane Popcorn and Whipped Pure Luck Goat Cheese with date jam and flatbread. There are hearty entree options such as Midnight Pasta or Wood Oven- Roasted 44 Farms Steak & Potato.

Lees Den will be open Thursday through Saturday from 4 p.m. to 10 p.m. Reservations can be made via Resy but walk-ins are also welcome.

The bar area is flooded with light.
Photo by The Laura Hotel, Autograph Collection” class=”uk-display-block uk-position-relative uk-visible-toggle”> click to enlarge

The bar area is flooded with light.

Hull & Oak, 1070 Dallas, is now open at The Laura Hotel, Autograph Collection. The hotel opened in November 2021 in downtown Houston and features a rooftop swimming pool, an onsite Cigar Concierge and offers events such as mixology classes. The menu at Hull & Oak is Southern-inspired, drawing from traditional Texas cuisine and the history of Houston itself. The breakfast menu offers dishes such as Johnny Cakes with strawberry preserves, fresh berries, whipped lemon ricotta and smoked maple syrup. On the brunch menu, diners will find Blackened Flounder with shrimp scampi, fried okra and herbed quinoa. For dinner service, there’s Crispy Cheddar Grits with a crawfish Creole sauce and a Seared Salmon Filet with blackened shrimp and Cajun savory bread pudding.
The Pulled Pork Benedict gives a taste of Texas.
Photo by The Laura Hotel, Autograph Collection” class=”uk-display-block uk-position-relative uk-visible-toggle”> click to enlarge The Pulled Pork Benedict gives a taste of Texas.

The bar offerings will include a selection of in-house barrel-aged cocktails plus an extensive list of wine, beer and specialty cocktails.

The hotel’s name is based on the Laura, a steamboat ship built in 1835 that was used during the battle for Texas Independence and has a history that includes a trip down Buffalo Bayou with the Allen brothers. The new restaurant’s design reflects that inspiration with a modern nautical theme that makes use of the abundant natural light coming in through the windows.

Prospector’s Grill & Saloon, 6225 Washington, celebrated its grand opening March 31. The new bar and restaurant takes its inspiration from the Wild West and the Gold Rush with a country slant as well.

The food on offer includes steaks, burgers, wraps, appetizers and healthy options plus desserts, including pies from House of Pies. The full bar will feature a large craft beer selection and an extensive wine list. There are plans for live acoustic music, an open mic night, karaoke and trivia plus a reverse weekly happy hour.

Everyone loves warm, fresh cookies at any time of the day or night.

Insomnia Cookies is expanding to Houston in spring 2022. There isn’t a definite address but the new store will be located at Rice University. The late-night bakery concept began in a dorm room at the University of Pennsylvania in 2003 and has been expanding ever since, with six more locations planned for this spring across the country. Many of them are sited on university campuses to serve the late night munchies of college students.
Warm cookies and cold ice cream are a happy couple.
Photo by Insomnia Cookies” class=”uk-display-block uk-position-relative uk-visible-toggle”> click to enlarge

Warm cookies and cold ice cream are a happy couple.

Its warm cookies are available in-store with pick-up and delivery options, as well. Besides its brick and mortar stores, the company offers nationwide shipping.

Black Restaurant Weeks launched April 1 and runs through April 10. Founded in 2016 by Warren Luckett, Falayn Ferrell and Derek Robinson, the event, part of Black Restaurant Week LLC, celebrates the flavors of African American, African and Caribbean cuisine and helps to showcase the minority-owned culinary businesses that may not have the advertising dollars for promote their restaurants and companies.

Some of the Houston participants include Fainmous BBQ, Flava Wings, Grisby’s Gras, Houston Sauce Pit, Mikki’s Cafe & Catering, Kale Me Crazy and Splendid Life Cake Bar. To see a full list of participants and events go to its website for the Houston directory. The restaurant was first founded in 1967 in Texas and serves fried chicken items like its Original Golden Tenders and the Big and Golden Chicken Sandwich. There are other non-fried items as well including its Chicken Salad and Golden Roast Chicken. For Lent 2022, the restaurant is offering Butterfly Shrimp through April 24. Southern Fried Catfish is also on the menu.

The chain operates in Texas, Louisiana, Oklahoma and Florida with 210 locations and is planning an expansion to Nevada. There are also plans to open an additional five Houston stores this year.

Dinner at New York Eatery can be light or hearty.
Photo by Becca Wright” class=”uk-display-block uk-position-relative uk-visible-toggle”> click to enlarge Dinner at New York Eatery can be light or hearty.

Its new Upper East Side Dinner Menu includes eight traditional, yet sophisticated, dishes like Montauk Poached Flounder and Yorkville Schnitzel. There’s also the Empire State Steak and the Hell’s Kitchen Rack of Lamb. There are lighter items such as the Sag Harbor Salmon or the Union Square Cornish hen and hearty fare like the Meat Packing District Short Ribs or the Bryant Park Brisket, a Jewish-roasted brisket with carrots and potatoes, a side salad and a challah roll.

The Hell’s Kitchen Rack of Lamb is served over couscous with a tasty eggplant caponata.
Photo by Becca Wright” class=”uk-display-block uk-position-relative uk-visible-toggle”> click to enlarge

The Hell’s Kitchen Rack of Lamb is served over couscous with a tasty eggplant caponata.

In addition to its new dinner menu, there are established dishes such as  its Bronx Burger selections and pasta dishes. There are also kids meals including the Eazy-Peazy-Cheezy challah grilled cheese and Mini Pizza Bagels. The restaurant also features a full bar with craft cocktails, wine and beer.

Saffron Indian Kitchen, 8045 N. Sam Houston Parkway W., is shooting to open the first week of May in the former Steamboat House restaurant. It will be a modern restaurant with authentic and rich Indian cuisine and will offer a full bar. The owners will also have an event center at the location and are currently accepting bookings for weddings, receptions, celebrations and corporate events.

The giant statue of Sam Houston, however, has been removed.

Fuddruckers, 3929 Southwest Freeway, is having a grand reopening April 5. Though the restaurant didn’t actually close during the remodeling, it is hosting a block party to celebrate its refreshed look and new ownership. The Fuddruckers franchise system was sold by Luby’s to Nicholas Perkins in June 2021, making Perkins the first Black owner of a national burger franchise system in the country.

The grand reopening begins with a private event from 10 a.m. to noon, then opens to the public at noon. DJ T. Gray will provide the music from noon to 4 p.m. and there will be a food truck from 11 a.m. to 4 p.m. There will also be kids activities like face painting, balloon art and activity sheets beginning at 5 p.m. and running through 8 p.m.

The grand reopening will also showcase the new menu, including its new plant-based and ice cream items.

Frenchy’s, 3602 Scott, is slated to open in late April or early May 2022, as reported by Eater Houston. First founded in 1969 by Percy “Frenchy” Creuzot, the fried chicken restaurant serves homestyle cooking with a New Orleans flavor serving sides like dirty rice, collard greens and red beans. It currently operates 11 locations around Houston.

The new location will be in between Texas Southern University and the University of Houston, down the road from its other Scott Street location. It will offer plenty of parking, multiple registers, an outdoor walk-up window plus a double drive-thru that should help with the typical long lines that guests encounter at the popular restaurant.

It will also have a covered front porch and an outdoor patio with umbrellas, inspired by the city of New Orleans.

PizzaForno, 1520 College Avenue, will open in the newly renovated retail center that takes the place of the old Bingo Hall that was long a fixture in the City of South Houston. The automated pizza concept bakes artisanal pizzas in less than three minutes and hungry customers can access it 24/7 with the digital screen.

The pizzas are made with natural ingredients and are baked in a state-of-the-art oven, delivering a 12-inch fresh pizza within minutes. PizzaForno was founded in 2018 by Canadians William Moyer and Les Tomlin. For the Houston expansion, local entrepreneurs Daniel Albelice and Keith Stephenson have signed on for the College Avenue location and are looking to launch three or four more in the second quarter of 2022.