Residents who had soundproof windows installed because of their homes’ proximity to Midway Airport are encouraged to sign up for replacement windows as soon as possible. Window replacements may be available for residents who live in the 13th,14th, and 23rd Wards. For window replacement eligibility, homeowners must 1) schedule an inspection within six-months of receiving notification from Chicago Department of Aviation; and 2) confirm that at least one window has been approved for off-gassing. 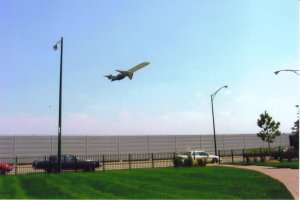 “We know issues with soundproof windows have plagued our community for a long time and that many residents are affected by this nuisance,” said Guerrero-Cuellar. “I am committed to finding solutions for every resident who has been burdened by soundproof windows that were meant to keep their families safe and comfortable but have caused all kinds of problems instead.”

The meeting will include discussion that will result in further recommendations to the Residential Sound Insulation Program Advisory Committee. This committee was established by state statute and has been meeting monthly since to address the problem windows in the Midway community. Quinn has been working to solve the problem for many years.

“I applaud Rep. Guerrero-Cuellar for immediately taking up this issue and understanding its importance to the Midway community,” Quinn said. “Angie has already been door-to-door speaking with residents, has held a number of meetings on the issue and is committed to helping Midway residents resolve a problem that is affecting their quality of life.”

Pamela Zidarich, a Midway resident, had the soundproof windows installed. She has been dealing with the stench-filled windows for many years. She raisedHe raised the issue with city officials, and has been working to help others get their windows fixed.

“I will not stop until all of these horrible windows are replaced throughout our community,” Zidarich said. “I applaud Rep. Guerrero-Cuellar for stepping up to help with this important project and Ald. Quinn for all he has done to replace these windows in our homes.”

Eddie Guillen, a close collaborator with Zidarich is encouraging residents to join the line for replacement windows.

“We know there are many local residents who qualify for window replacements,” Guillen said. “We hope people will act quickly to have windows tested and replaced so we can restore some peace of mind for homeowners in the Midway community.”

Ray Hanania, a columnist, author and former reporter at Chicago City Hall (1977-1992), is an award-winning columnist. A veteran who served during the Vietnam War and the recipient of four SPJ Peter Lisagor Awards for column writing, Hanania writes weekly opinion columns on mainstream American & Chicagoland topics for the Southwest News-Herald, Des Plaines Valley News, the Regional News, The Reporter Newspapers, and Suburban Chicagoland.