After removing a barn floor and a roof, I still had lots of building rubble: ugly, irregular, and difficult to hide. What was I going do with it?

The obvious answer was to take it to the tip, but I didn’t have a trailer and, besides, there was just so much of it.

I found a temporary solution that was lazy: build a huge, unattractive mountain on one side. gardenIt’s best to forget about it.

I tried to ignore it, but it looked like an explosion site. I considered adding grass seed, but knew it would look ugly.

I wished nature would render it invisible – but it didn’t. It just got worse as the weeds crawled across it. We kept adding to it: soil, branches, and anything else that wouldn’t go on the compost, or was too large to fit in the car’s boot.

I became increasingly unhappy about the situation. What do you do about an immense amount of junk? 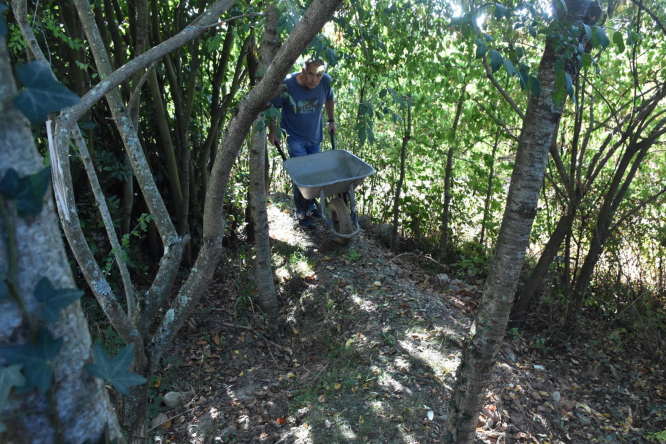 While flipping through a book, I realized the answer: You turn it into a piece land art.

I was fascinated by an aerial photograph of the Serpent Mound in Ohio in the US – a Native American earthwork of unknown date and origin.

This got me thinking: Could a serpent mound I built myself on a smaller scale?

It could be a raisedThe pathway leads through the trees to the back. garden. This was right next the trash pile so I didn’t have to move it too far.

I would be able to achieve two goals simultaneously: hide the junk and make a. gardenThis feature. It was clear that it would require some effort, which meant that time could not be spent on more important tasks.

The project had one advantage: it was very mindless and there was no deadline. I could work for a half hour here and there if I didn’t feel like doing more pressing tasks.

I had to begin by cleaning up the mess. First, I took out the largest blocks and laid them along the path to my serpent mound. Anything that was easily smashed up was broken into smaller pieces with a two-handed mallet – broken roof tiles, for instance.

Over the winter months, sorting continued. Anything organic was sent to the compost heap. Some wood can be used to make a stove. I made sure to remove all soil and keep it in a separate container. This would create a layer that I could grass over.

Gradually, the mound rose 30cm above the surface of the ground – stretch it out in a ribbon and you can hide a lot of rubble in this way. The 50cm-wide top was kept fairly level so that it could be walked on comfortably.

I compacted all the rubbish and cleaned up the sides after it was taken from the wheelbarrow. I then tipped fine soil along the mound and waited for rain. Then I scattered grass seed that promised to thrive in the shade.

I used the exact same seed to grass the area where the rubbish mountain had once been. Today, this part of the gardenIt is a vision full of green and beauty with not a single building block to be seen.

French farmhouse renovation: How can you bring life to redundant spaces